I'll begin this article by brushing up a few definitions:

A function is a mapping between two sets: the domain D and the codomain C. 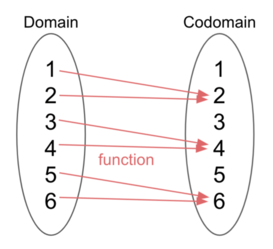 I'll also brush up on what a Vector Space is: a vector space $V$ is a set of vectors over a given field $F$ on which two operations (functions) are defined:

There are some other requisites of a vector space, such as the existence of an additive inverse and identity elements, but I won't get into the nitty-gritties of those. Just keep in mind that addition and scalar multiplication over a vector space are closed.

From the above two statements, we can see that the maps themselves are linear: that is, they can be added and scalarly multiplied, with the resulting map preserving the domain and codomain. We can thus say that the functions thus defined form a vector space themselves, which we call a function space. Note that there are a few more details involved, such as the existence of an identity function and an additive inverse. Similar to the additive/multiplicative proofs, these follow from the properties of the vector space. One interesting question to note is what if there is no function in the space that maps an element of $X$ to the identity element $\vec{0}$ of $V$? Would the resulting function space still be a vector space?1

$K(s,x)$ is called the kernel of the integral transform, and the transform has different intuitive meanings depending on the kernel and the limits used. A full list of common kernels can be found at the Wikipedia page of Integral transforms. A few key things to note however are:

Another bit of intuition regarding the laplace series comes from thinking about it as a continuous version of a power series. If we consider the power series

The continuous analogue of this power series is the integral

Therefore, the laplace transform is like a continuous analogue of the power series.

I haven't covered the several properties of the laplace transform: those specific details can be found on the Wikipedia page. This was mainly to give an overview of the mathematical backbone that goes into transformations such as the laplace and fourier transforms.

For further reading on function spaces, see Vipul Naik's notes and Terry Tao's notes on the same. More on laplace transforms (including problems) are given in George Simmons' Differential Equations with Applications and Historical Notes, chapter 9.