Pop the champagne and dance, team, for we're fifth! 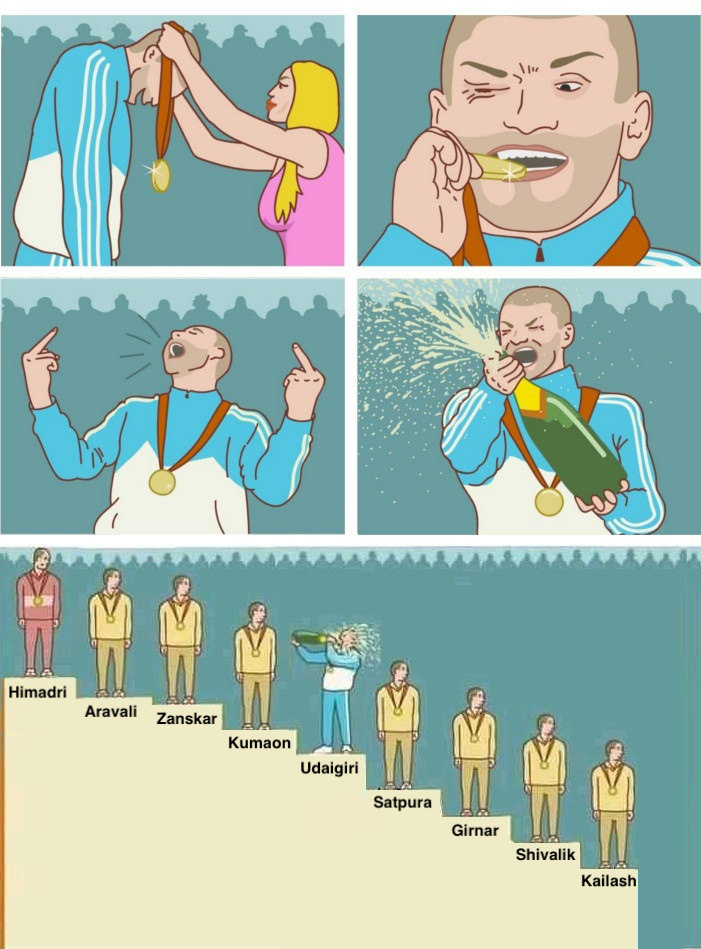 Jokes aside, I'm lukewarm about the result. Proud of what a ragtag bunch of people came together and assembled in the span of around two weeks, but simultaneously disappointed for not reaching the lofty expectations we set of ourselves. Hindsight is 20/20 and often very saddening, for there is seldom joy in finding out what you couldn't see earlier.

With that out of the way, let's see what hindsight has in store for us, shall we?

Aravali had three chief editors leading the team, along with a very talented senior in design. One of the chief editors, a very passionate writer, wrote 90% of the magazine content on his own.

Zanskar had the Web editor, along with an incumbent Creative team member and Chief Editor in their team.

Kumaon? I don't know what Kumaon pulled out of the bag, but the difference between them and us wasn't much (For reference, Zanskar dominated the content scores, while Aravali dominated the design section. Himadri was balanced across both, courtesy of picking a theme and sticking to it).

And then we have Udai.

Who pulled our team to fifth place.

We also came third in design, even though Rahul stormed into my room 4 days before the deadline and said "Video games". This is the part where I say "The Rest is History", but history is written by the victors, and we're not.

Treating this experience as a chance to exercise my leadership skills is probably the right way of looking at it. While I won't pat myself on the back (there were many things that I could've done better), I think more has to be said about the entire performance framework that teams operate upon.

Let's start with Culture. Yes, the buzzword that hostel reps throw around all the time to get participation. The reality of hostel culture is that similar to organizations, a few key, experienced seniors can accomplish much more and channelize much more effectively the lower, inexperienced team members' efforts. More so, these seniors are intimately involved with the club and have a say in what happens eg if deadlines need to be postponed. Having seniors in a hostel belonging to a club is vital to inculcate culture for that club in that hostel. Seniors would need to evangelize and lead team efforts here.

Seniors aren't getting much out of it. If anything, Juniors and Seniors are on their way out of the institute and should focus on themselves, rather than their freshie and sophie counterparts who would be more enthusiastic about this. Unless they are in secretary/GSec positions where things would look good on their CV (and are playing the political Game of Thrones in IITD, a very taxing and time-consuming hobby for someone not looking at consulting), the only reason for them to invest the kind of effort that they're investing is purely altruistic: out of passion.

Let's take the above cases: all the seniors in the winning hostel(s) either cared very deeply for their hostel and were passionate about the activity, or had some skin in the game (vested interests in obtaining a position in BSP for the upcoming term).

This has a cascading effect: More skilled seniors = More skilled juniors, and more skilled juniors = a better result. Doesn't matter if you're Thomas Dodge or if anime has made you believe the superpower of friendship, unless each of your team members can get 20 illustrations done in a day in illustrator, your magazine simply won't have enough design to fill it's pages. Unless your seniors churn out ideas rapidly and have a unifying vision that the team can rally behind, your magazine will read like a patchwork quilt.

Talking about leadership in a personal context is always a very dicey thing. I admit that in whatever capacity I led the team and in whatever role I played, I was suboptimal in some aspects and superoptimal in others. Maybe I didn't balance the scales properly. I'll admit.

Looking at a silver lining, we made two teams this time: which meant that more freshers were introduced to the entire process, and hopefully definetly from next year onwards, we'll have a stronger footing in BSP, and on a more meta-level, inculcate better leaders.